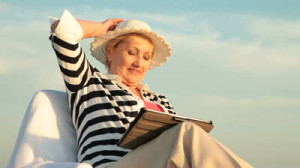 Many people consider the iPad for seniors who want to get started with technology. To some people, the perceived usefulness of the touchscreen and the popular iOS make the iPad a tempting option for their senior loved ones who want to use computers and connect online.

However, when choosing the best device for a senior who has very little experience with technology there are many factors to consider. An iPad may be a good option for some seniors, but it’s not the best for all, and there are several other kinds of devices out there to consider.

Here at Telikin, we’ve had thousands of conversations with seniors and tech novices learning how to use the computer and the internet, and so we know what questions they ask, what hesitations they have, and what issues they are facing when it comes to starting with technology. One of the best things to keep in mind when choosing a computer for seniors is that the device is not for you – it’s for someone who isn’t familiar with technology and the skills that you may think are second nature.

Here’s a list of questions to think about before getting a computer for a senior who is a tech novice:

1. Will the senior have easy access to on-going support?

For technology novices, it will take some time to get confident and comfortable using the new device. Technical support for issues with the software or hardware is important, but new learners will often need “How To” support to show them how to use the device. Are you going to make yourself available for when they have questions about how to do something? Many people would like to help their parent learn how to use a computer, but geographic distance makes it impractical. Anyone who has tried to give technical instructions over the phone knows how difficult it is. If you get an iPad for a senior parent, do they know who they can call when they have questions?   Is that individual going to be patient enough to repeat instructions and empathetic enough to know how to describe things in a relatable manner?  Here at Telikin, we’ve seen first-hand how much on-going support can help someone who is trying a computer for the first time. Friends and family often overlook the necessity of support when helping their loved one get connected, but really, support is a very critical aspect.

2. Will the senior have to configure the device themselves?

Configuration is important when considering the iPad or other device for a senior. One of the benefits to the iPad is the huge selection of apps that can be downloaded. However, as demonstrated in the 2010 study, “Enhancing the Social inclusion of Seniors by Using Tablets as a Main Gateway to the World Wide Web”, by Franz Werner and Katharina Werner, a device should be set up before given to a tech-novice senior in order for them benefit from it. Doing so helps reduce the barriers to getting started and simplifies the learning process.

This question raises another issue with traditional computers – if the user can download or install any program, the computer becomes susceptible to harmful viruses. Without knowing the signs of a virus infected installation, a new user (even tech-savvy users) can accidentally infect their computer.

3. Does the device have a consistent user interface?

The results of Werner and Werner’s study also showed that a consistent user interface among different programs on a device is important to helping seniors master technology. If the user must learn new navigation, buttons, and skills for every program, the entire process is that much more difficult. Look for a device that has similar style buttons and navigational patterns and performs in the same expected manner so that the user can quickly become fluent. While the iPad can have thousands of useful applications, it may prove difficult for seniors to adapt to each specific interface.

4. Will the senior be able to comfortably use the device?

Many people like the iPad and other tablets because of its small size and portability. However, these aren’t necessarily characteristics of the optimal device for seniors. For example, holding the tablet while trying to use the touchscreen can be tiresome. Laptops have the benefit of being portable, but do not require being held. However, most laptops are not touchscreen, an attractive feature for seniors. Desktop computers, because they sit on a surface, are more ergonomically designed to allow for correct position of head and arms. When deciding between a tablet, laptop, or desktop, the specific abilities and limitations of the senior must be considered. Does the senior actually need the device to be portable? Would he or she rather have something sturdy that they don’t have to hold? If you think about how and where the senior will be using the computer, you’ll be able to make a better decision.

Additionally, a touchscreen is very intuitive and can reduce the barriers to seniors first learning computing. However, typing on a small on-screen keyboard is not always easy. A physical keyboard with large print keys may be necessary. For these reasons, we developed the Telikin as a touchscreen computer with the capability of an on-screen keyboard, but also include a physical keyboard. We recognize that what works for one individual might not work for another.

5. Will the device “grow” with the user?

When first expressing a desire to learn computers, many seniors only want to send emails or play games. Once they learn these skills and begin to feel confident, they often want to move on to other activities. Seniors who never thought they would even go online find themselves setting up a Facebook account to share pictures with their grandchildren! The device shouldn’t be so limited that it only lets the user do one or two things. Instead the senior should be able to explore more as he or she gets more comfortable, without having to add extra software or applications.

So when it comes to the question of the iPad for seniors who want to move into the digital age, the answer is that every individual is different, and you should consider these questions before committing the user to a device. It is also important to consider the return policy of the product, because what you think will be a good option, might not end up working. Here at Telikin, we’ve found that giving our customers 60 days to try the computer gives them more than enough opportunity to ensure that it’s the right product for them.

You can read the entirety of Werner and Werner’s study here.