Home » Uncategorized » What about the residents?

Technology has rapidly advanced in senior communities as a means to facilitate care management, electronic health records, staff management, scheduling, billing and other core functions. However, one of the areas often overlooked is how advancing technology could benefit patients and residents. The most obvious reason for this disparity is the complication of today’s modern devices, specifically computers. What if we could significantly reduce technology complications and gain the benefits for residents?

LEFT: Shy Alexa shows off her Christmas presents to her great grandmother, Lilian, who has speech aphasia. The two enjoy a 20 minute conversation without a word spoken. Smiles and gestures where all that were needed. RIGHT: Fred’s mother, Lilian, has speech aphasia as a result of a stroke and has difficulty expressing herself over a regular telephone. Here she uses video chat to show her son, Fred, what she is talking about and visually expresses her excitement in receiving a Christmas card from her new friend Angela.

Seven years ago, we set out to remedy this problem for seniors and the idea of Telikin was born.
Lillian, my mom, had a stroke when she was 47, which left her paralyzed on her right side and with expressive speech aphasia. She also had developed macular degeneration, which, coupled with the loss of her other eye earlier in life, significantly reduced her vision. Over her life, she raised 8 children and managed quite well in her home for 30 years until most of the children moved out and my father passed away.

She fought moving into assisted living for years. Consequently, she lived with my sister for two years and later moved in with my brother. Both situations were challenging, to say the least.

Meanwhile, my wife Nancy’s, work as an RN had helped her to develop significant experience in working with seniors.

It still took another year to convince my mom to give assisted living a try. Like most seniors, she was apprehensive about leaving her surroundings, friends and family.

My brother sought to ease this transition and configured a computer to play a slide show of hundreds of pictures of family and friends taken over the past 20 years. He also enabled her computer to auto-answer Skype video calls. It worked great.

It was also important for my mom to stay in touch with the family. Her children and grandchildren were scattered about: one in Kentucky, another in Maryland, a third in California, a fourth in Haiti, and three more lived in Pennsylvania. With video calls, she could now see all of us more regularly, as the entire family would frequently reach out to her throughout the week. She loved it.

A video call allowed her to express herself when she could not get the words out. Seeing her daughter and her family in Haiti, or her son and grandchildren in Kentucky was a magical experience for her.

Awhile after, we began to see other benefits as well. My mom was a worrier — well I guess most moms are. Often she would receive letters in the mail that she could not read because of her macular degeneration. She could make out the letter was from the bank, but could only recognize that it did not look like her regular statement.

So, naturally, she called me on the speed dial phone we set up for her. It was very difficult for me to understand her over the phone, but I could gather she was upset. She seemed to think she was out of money.

I placed a video call to her and asked her to hold the letter up to the camera. I could then see the notice was simply informing her of a transfer I made from her money market account into her checking. Instantly, she could relax.

Without such technology, my mother would have needlessly worried for the next day or two until I could come to see her in person.
In December my mom called me again about another letter she had received. As before, I could not tell if this was good or bad news. Again, I made a video call to her and asked her to hold up the letter. It was a Christmas card she received from a new friend and she simply wanted to share this good news with me. Now I understood. I could relax.

That same December we had Mom over to our house for Christmas. We also have a Telikin in our home, so we made a video call to her son’s family in Kentucky. Their daughter, Alexis, is my Mom’s very sweet and very shy, four-year old great granddaughter. When it was her turn to video chat, she did not say a word. Alexis simply showed my mother every present she received for Christmas.

Not a word was spoken, but their interaction was perhaps the sweetest 20-minute conversation I have ever witnessed. Between Alexis’s shyness and Lillian’s speech aphasia, smiles and gestures were all that were needed.

Just as Telikin computers are a useful communication tool for residents of senior living communities, we have found that they can also assist staff as a therapy tool to encourage, engage and inform their residents with patient education information that reinforces the new materials they learn during therapy sessions.

Many of the hundreds of communities currently using Telikin in the US and Canada have discovered its value in providing residents with cognitive and social stimulation that can have profound and lasting positive effects on their day to day functioning.

Take our experience with United Hebrew Geriatric Center in New Rochelle, New York, which utilizes Telikin as part of their Occupational and Physical Therapy services. A five week study carried out in their facility by Pace University graduate students Gina Strahl and Stephanie Catania found that Telikin computer use improved eye-hand coordination and dexterity and strengthened the fine motor skills of the residents studied.

In an additional study, the same authors tracked UHGC participants over a six week period using the Telikin computer and its built-in Memory game. Subjects were challenged to remember the position of images and reveal them using Telikin’s touchscreen interface during five-day-a-week, 60-minute sessions. During this time period, all of the study participants’ memory game scores improved.

The researchers reported that one subject, Lizzy, who had left arm paralysis as a result a stroke at age 85, “. . . improved greatly and could easily speed through her memory game. This [improvement in her memory scores] inspired confidence to explore the operating system and to gain a better understanding of technology.”

The researchers further noted that Lizzy enjoyed seeing her test scores improve each week and was very proud of her progress; so much so, that this improvement encouraged her to use email to communicate with her family and friends. Ultimately, she became able to email independently without the need for staff assistance. 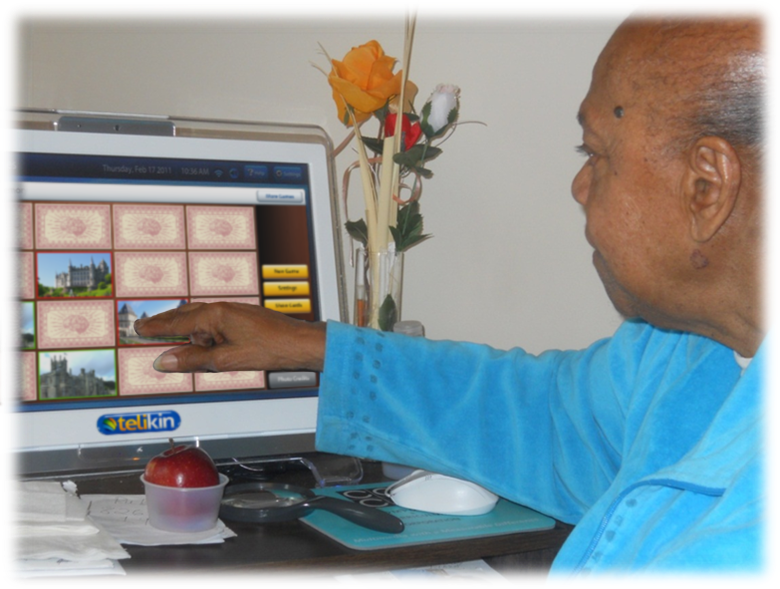 United Hebrew Geriatric Center in New Rochelle, New York, resident, Lizzy, participates in a study conducted by Pace University Graduate students to assess computer use and improved coordination among Seniors. After some practice, the once withdrawn Lizzy is able to complete a game of memory in just over 30 seconds. This game also gave Lizzy the confidence she needed to learn to use a computer as a communication and socialization tool.

These positive experiences with the Telikin computer also provided her with more opportunities for socialization. Soon Lizzy was signing up for Facebook and posting photos, as well as conducting video calls with her family.
Once known to be withdrawn, frequently staying in her room for meals and choosing not to be involved in community activities, it was reported that Lizzy was gradually becoming more engaged with staff members and her family and that she was eating her meals with other residents in the dining room.

In the seven years since its inception, Telikin’s reach has grown significantly. We now provide simplified computer technology to over 50,000 seniors. We continue to improve and refine our product and have validated that it is the easiest computer for seniors to learn how to use.

Our customer support personnel are a patient and caring team that knows how to speak and relate to seniors, including residents like yours, and how to enhance their lives by helping them stay engaged and connected with others.

We are now optimizing our offerings to meet the needs of residents and staff members in senior living communities with more activities and therapy applications, as well as the integration of additional services that support such communities. To that end, we have developed the following capabilities:

Our number one goal is to make communication and therapy technology more accessible and engaging for your residents, and all seniors, in order to improve their quality of life.

“We’ve been studying this field for years now,” said Pace University Professor of Gerontechnology, Jean Coppola in a discussion about the benefits of our product. ”When it comes to computers designed for seniors, nothing comes close to a Telikin.”